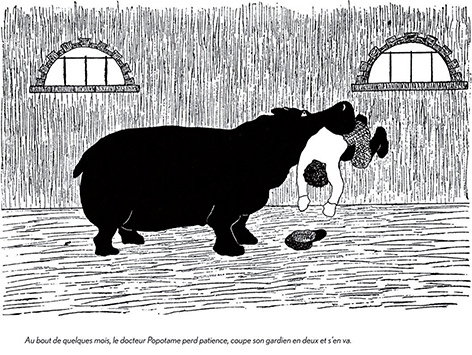 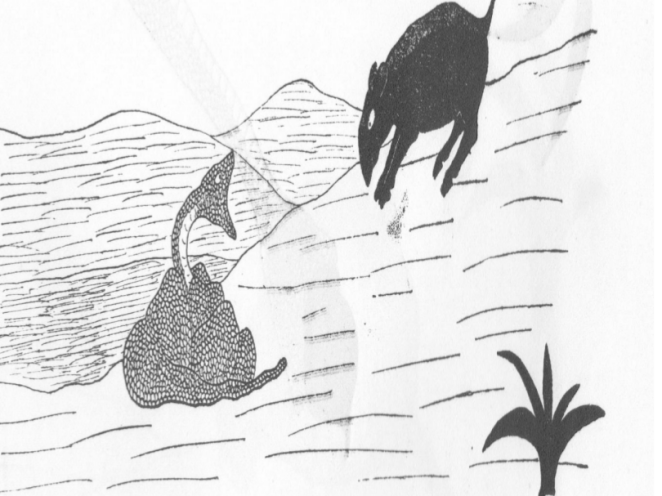 The boa and the tapir meet. 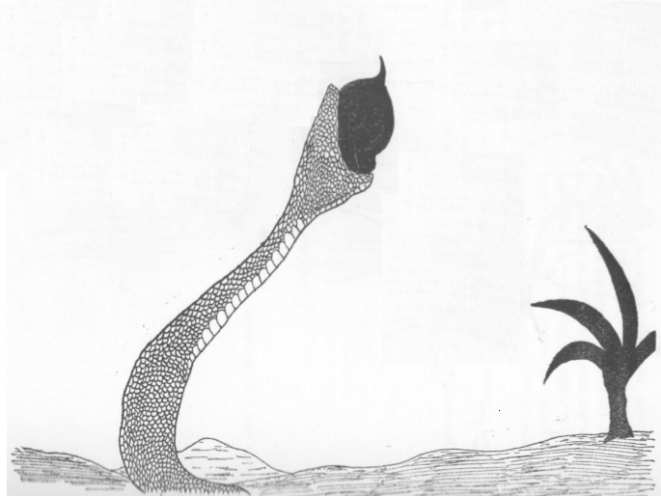 The boa eats the tapir.

The tapir swells in the boa’s belly. The boa is very worried.

The boa bursts. The tapir trots off to wash in the river. 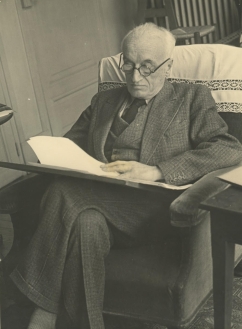 Léopold Chauveau (1870-1940) was a distinguished visual artist, illustrator, and author of a total of twenty books, including work for both children and adults. He collaborated and enjoyed friendships with such important figures as André Gide and Pierre Bonnard. He is currently gaining critical recognition: with new editions of his books; the publication of a biography (by Professor Jacques Poirier) and of scholarly articles; and exhibitions of his artwork, including a retrospective of his sculpture and illustrations due to be held in Spring 2020 at the Musée d’Orsay. In addition to this interest in France, Chauveau’s work has been published in Czech and Japanese translation; and in 2005, Japanese film-maker Koji Yamamura adapted Chauveau’s story ‘Le Vieux Crocodile’ to make an animated film, ‘The Old Crocodile’ (available here with an English soundtrack: https://www.youtube.com/watch?v=0HKYR8cI4cw&t=146s).
Chauveau became a professional author after his traumatic experiences of the First World War. As a doctor, he had worked in hospitals for wounded soldiers, and he also treated his own son Renaud, who died of illness in 1918 at the age of 12. Chauveau incorporates conversations with Renaud into his children’s books, including them at the start and end of every story. The anti-authoritarian relationship between father and son is one of many political elements in his work, which was neglected largely because of its radical anti-militarist, anti-colonialist and environmentalist ethos.
With his skilful use of rhyming prose, Chauveau shows his love of wordplay, comedy and satire in this selfcontained short story. The tale was included in the collection Les Cures Merveilleuses du Docteur Popotame (The Marvelous Remedies of Doctor Popotamus, Paris: Les Arts et les Livres, 1927; Nantes: éditions MeMo, 2016), in which Chauveau creates an alter ego, Docteur Popotame, a wild hippo and a doctor who, unlike his creator, has the power to cure death! Popotame lives harmoniously with local black humans, and defends his area from invasion by white big game hunters. When Les Cures Merveilleuses was republished in 2016, it was described as ‘a masterpiece’ (‘un chef d’oeuvre’) by Philippe-Jean Catinchi in this review for Le Monde (https://www.lemonde.fr/blog/albumsjeunesse/2016/12/16/noel-en-vue-faites-le-pleindalbums-jeunesse/#more-72).

Nat Paterson is a literary and academic translator from French and Italian. He gained an MA in Literary Translation in 2016, and his first book translation was published the next year: Poli, G., and G. Calcagno, Echoes of a Lost Voice: Encounters with Primo Levi, Elstree: Vallentine Mitchell, 2017. He is currently translating and pitching a number of works by Chauveau, with the support of the author’s grandson, Marc, who has given him access to the family archive. He has won a scholarship to do an MPhil at the University of Glasgow about Chauveau’s children’s books and their relevance to present-day environmental issues; and is credited in this recent article about Chauveau by Emeritus Professor Roger Little (http://sielec.net/pages_site/comptes-rendus_lecture/Chauveau_antiraciste.pdf).  He can be contacted via his website, http://academictranslation.co.uk, or by email at 2505036p@student.gla.ac.uk.

Nat Paterson and I would like to thank Marc Chauveau, grandson of Léopold Chauveau, for copies of these wonderful illustrations, and his kind permission to publish them here. All rights reserved.