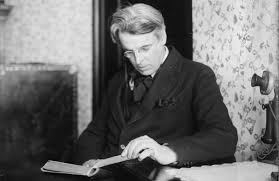 How far can a poet stray when translating a poem by another great poet? As far as his heart will take him, I believe.

Let us start with a brief analysis of the poems:

In the above poem Yeats uses specific poetic devices: form (3 stanzas of four lines each; 10 syllable metre); rhyme (abba, cddc, effe); caesuras (in lines 2,3, and 4, which slow the pace of the poem and add to the imagery of a tired elderly person together with the words sleep, nodding, slowly, dream); anaphora (the word and, begins 7 lines); repetition (loved is repeated 4 times); alliteration and consonance (in the first stanza the repetition of the ‘s’ sound slows the pace, but also ‘g’ glad grace, and ‘l’ little sadly how love fled…); voice (a very personal account); and enjambment etc..

In Montale’s translation the form is similar (four lines in each stanza), but the metre is not; the anaphora using e/and is present, but the rhyme is not reproduced. Montale uses alliteration and consonance masterfully (ha amato anima, la tortura del tuo trascolorante…) but the choice of consonants makes the poem quicker; the enjambment, although in different lines, is present; the word “loved” is not repeated as many times (2 instead of four); but of all the poetic devices, the most important in my opinion is the voice, and here, although it is personal, touching, it is different.

The poem in translation, for however beautiful, is not like Montale’s own poetry, and does not perfectly reflect Yeats’s. There is, to my ear, something different: it does not speak the same emotions as Yeats’s poem does, and the meaning, too, in the last lines, is slightly different.

There is a softness in Yeats’s poem, a slow, pensive tone that is typical of the elderly, and which reflects the mood of the entire work; and there is underlying sorrow. This sorrow – which Montale translates with the word tortura – permeates Yeats’s text. It is the sorrow of one whose love went beyond the beloved’s beautiful exterior and who, unlike others, loved her “pilgrim soul”; and it is the sorrow of the elderly woman who has lost her beauty and that man who loved her for what she truly was.

As I already mentioned, in Montale’s translation, the pace is somewhat faster, the sounds harsher. This fact makes me think that what is different is perhaps the subject of the poem, the protagonist.

No translator is truly objective. When we read a poem, we interpret that poem. It calls to  our minds moments in our lives. It speaks to a part of our hearts, and that is what we translate. We translate the words, certainly, but more importantly we translate our interpretation of those words. I wonder if, for Montale, it was the same?

The protagonist of Yeats’s poem is believed to be Maud Gonne. She was  his muse, and she was a strong influence on his poetry. It is written that he asked her to marry him on numerous occasions, but she always said no, maintaining that it was this unrequited love that made his poetry effective.

The passion Montale felt for his own muses, on the other hand, was not unrequited: Clizia— Irma Blandeis— and Mosca—his wife Drusilla Tanzi— loved him deeply. He married Drusilla in the ‘60s, after tens of years together, and dedicated some of his most beautiful poems to her. She was his strength: “I descended millions of stairs with you on my arm/ not only because four eyes perhaps see more./ With you I descended those stairs because I knew/ the only real pupils, although terribly dimmed,/ belonged to you.” (from the poem “Ho sceso dandoti il braccio…”) https://paralleltexts.blog/2015/03/17/ho-sceso-dandoti-il-braccio-i-descended-with-you-on-my-arm-by-eugenio-montale/

Was she, therefore, in Montale’s thoughts when he translated the poem? Did the “sorrow” of someone who did not live his love for Maud, become, in translation, the “tortura” of one who loved and lost Drusilla almost immediately after marrying her? For it is precisely in the use of the word “tortura” that I find the greatest difference between the original and the translation. Montale’s choice of words makes the poem more immediate, and this is reinforced by his repetition of the letters t in line 1, and t and o in line 8, “tintinnante/ tra fuoco e veglia…”, and “la tortura del tuo trascolorante volto…”, respectively. “Tintinnante“, “senza fretta“, “tortura“, “trascolarante“, compared to “nodding”, “slowly”, “sorrow” “changing face”, quicken the text; they change the mood.

In addition, there is the matter of the last lines of the last stanza. In the original poem, the poet asks the woman to remember, “Murmur, a little sadly, how Love fled and paced the mountains, hiding his face in the stars”. The tone is subdued, soft.  After being asked to take down the book (which contains the poem?) in the second line of the first stanza, the woman is asked to remember the poet who loved her in these last lines. In Montale’s version, it is more direct. The woman is asked to direct her question to love: “e di’ a te stessa a bassa voce Amore,/ Ecco come tu fuggi alto sulle montagne/ e nascondi il tuo pianto in uno sciame di stelle” (and say to yourself quietly, Love, this is how you flee and hide your tears in the stars.) The tone is no longer soft. The words “Ecco” and then “tu” are strong, decisive, as if the translator/poet were underlining a wrongdoing, as if he were speaking of abandonment. Drusilla’s?

I have reread the poem numerous times. The difference to me is striking. It is, I believe, a perfect example of just how wonderful it is to translate poetry, and just how subjective the translation of poetry can be. Even when the translator is a brilliant poet himself. But most of all, it is enlightening: it is like peeking into the hearts of others, and rummaging through private corners of the mind.  – M.C.

The poem, in written form and audio version, When You Are Old by William Butler Yeats can be found here: https://www.poetryfoundation.org/poems/43283/when-you-are-old